The final meeting of the four-part Community Engagement Sessions by Uptown Partnership seemed to be much more upbeat than previous sessions.

The meeting was held Saturday at the UP office on Franklin Street. It was attended by about 30 people who filtered in and out.

Attendees were asked to walk around to different groups, sit for a 15-minute session and brainstorm and discuss both existing ideas and new ones as well.

The different groups were the same topics that have been discussed in the previous meetings as targeted areas that need improvement around uptown Martinsville: design, promotions, organization and economic vitality.

Around 30 residents were asked to go to a committee that spoke to them and then either shuffle between the groups or stay with one as they preferred.

Design was focused on pocket park upgrades, facade improvements, making streets for people, uptown dog park, closure of Walnut Street to vehicle traffic and an uptown amphitheater. On the Post-It notes, people wrote: turning the newly improved alley on near walnut street into an event destination, healthy initiative, dancing places, hiring design consultants, a dog park, a community garden, increased parking, aggressively revitalizing so that other businesses can move in and being forced to sell if they won’t, a green space, dog park in outlying area bordering uptown, outdoor speakers to play music on Main and Church, two-way streets, community kitchen, an area with hammocks, help existing businesses be more successful before bringing in new ones, revitalize Hairston Home, a splash pad for kids in front of municipal building and to work on the first impression that people see when coming to Martinsville.

Promotions focused on sculpture trails and mural, performance opportunities and historical signage. Some of the sticky notes that people were able to write on the board listed the following ideas: bringing back the Rives Theater, expand the farmer’s market, art galleries, connecting with local churches, promoting the speedway and Rooster Walk with art sculptures, art walk through uptown, performance opportunities for a younger demographic, creating a music venue, an all-encompassing venue for entertainment, changing art installments around town, wine & beer crawl to historic sites and attractions, night time opportunities, trolley in uptown for tours, partnering with youth organizations and an interactive community mural or art project.

Organization focused on getting volunteers involved so that the ideas and discussions happening can be put into place. The things that people wrote on the board included: using the public to disseminate the information such as the Boys & Girls Club, YMCA, charity league, schools, local shops, social clubs, newspaper, and Facebook; advertising with local media; discussing why businesses are closed on Mondays; having a central location for food trucks to meet for better congregation of people; having local clean-up efforts; utilizing local artist; using the old Rives Theater location; being flexible with volunteers who are not always available; and making Uptown Partnership t-shirt.

Economic vitality focuses on small scale manufacturing, business attraction and access to capital mechanisms. On the sticky notes, people wrote: an uptown grocery deli or market, a place that sells wine, a rooftop bar that takes advantage of the view, a great lunch spot that is hopefully a diner, pedestrian-friendly amphitheater, a parking garage to facilitate and increase traffic, high quality bars and restaurants, electric car chargers, an art gallery as an extension of Piedmont Arts, two-way streets on Church and Main streets, more uptown living opportunities, incentive programs, building updates, making business owners update old building or sell to new investors who will, community gym for sports tournaments and incentives for people to invest in the community.

At the end of all the session, everyone gathered back in the front room for a general discussion of what they liked about the meeting and to debrief.

Barbara Parker said that she loved how the meetings were so focused on incorporating art into their revitalization efforts.

Mandi and Brian Hundley, the new owners of The Wellness Bar that will open on June 18, both spoke about having a public interactive art exhibit somewhere around town that would be changed out periodically.

The second Uptown Partnership community meeting featured an interactive survey on interest and disinterest for community improvements to Uptown Martinsville.

Monique Holland is a reporter for the Martinsville Bulletin. She can be reached at [email protected] or at 276-734-9603.

Mon Jun 6 , 2022
Featured on two episodes of HGTV’s “Cut price Mansions,” this stately and transformed a few-story home in Kansas Town, MO, attracted interest the instant it strike the current market five days back for $389,000. An offer you is now pending. Though its list value sits nicely about the median listing […] 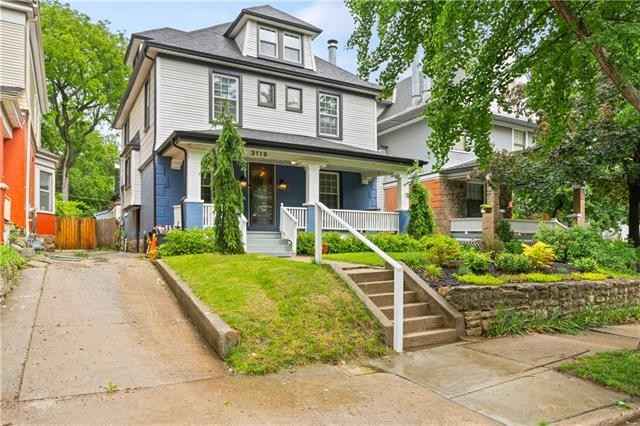