From the opulence of 18th century Europe to the craftsmanship of the Arts & Crafts Movement, historic interiors around the world continue to inspire us. Many of the interiors detailed below feature hand-painted wallpapers, carefully woven tapestries and rows of portraits in gilded frames. They boast intricate upholstery, carved wooden panels and countless cartouches. Rich textures, saturated colors and a wide array of both international and domestic influences abound. With so many vintage and antique styles coming back into vogue, designers and homeowners alike have begun mining historic interiors for inspiration. From the Austrian palace of Schonbrunn to the Emery Walker’s House in London, follow below for five stunning historic interiors we absolutely love.

Why Historic Interiors Continue to Capture Our Attention

Over the last several years, interest in antique furniture, vintage wallpaper and other elements of historic interiors has skyrocketed. Most attribute this surge to three primary factors: focus on sustainability, desire for personalized spaces and reverence for craftsmanship. First, consumers are becoming more conscious with their purchases and are increasingly engaged in sustainable shopping. Amy de Klerk explains in her article “Antique furniture is becoming increasingly popular with millennials” for Harper’s Bazaar. Quoting Pontus Silfverstolpe — co-founder of Barneby’s –, de Klerk writes that “‘changes in consumer behaviour, led by millennials, is driving this new interest in using renewable pre-owned items.’” This new generation of buyers “‘knows that antiques are better for the carbon footprint.’” Writing for Architectural Digest, Kate Reggev agrees. Reggev notes that “people are shopping with their values in mind now.”

Second, homeowners in 2021 are less interested in minimalism and more interested in spaces with personality and character. Designers believe this could be due to Coronavirus lockdowns, which encouraged homeowners to reconsider both the functionality and fulfillment of minimalist interiors. Quoting interior designer Lance Thomas in an article for House Beautiful, Jessica Bennett explains. Bennett writes that the COVID-19 pandemic “forced homeowners to reflect, dissect, and evaluate how they live in their homes.” It also forced them to examine how “they want to change and improve upon their relationship with home.” In the same article, Bennett speaks with Chairish co-founder Anna Brockway, who notes the return of vintage antique interiors. Brockway expects “gilded finishes, floral prints, and ornamental details [in] historic styles” will remain popular as “design styles of the past make a comeback.”

Lastly, interiors inspired by historic homes remain popular due to the craftsmanship, care and expertise with which period pieces were created. Reverence for craftsmanship in furniture, wall coverings and other elements of interior decor has reemerged in recent years. This has occurred as consumers fall out of love with “fast” items. Fast furniture, fast fashion and other “fast” products cost less than quality pieces. However, these pieces often fall apart quickly and easily, ending up in landfills within months of purchase.

5 Historical Home Interiors We Love in 2021

In an interview with House & Gardens, architectural historian Oliver Gerrish explains why historic interiors continue to thrill us. Gerrish notes that “historic interiors were constructed with a deep knowledge of architectural precedents.” This was actually “typical for the jobbing artisan right up to the most celebrated designer.” The balance achieved between form and function “made historic interiors harmonious in a way that we still admire today.” Because these designers were “better informed of interior decorative precedents,” they were often “more daring…in their choices of colours, styles and scale.”

In some ways, designers of historic interiors were more experimental, playing with proportions, palettes and more. For example, Gerrish references the “positively shocking palettes” of Georgian homes. He also touches on the murals at Plas Newydd, which “give long, dark rooms an aspect of fantasy and theater.” Even decades — or centuries later — these spaces easily make us “feel transported into another realm.” Below, find five historic interiors that do just that.

In our post “160 Years of Iconic Morris & Co Wallpaper,” we explored William Morris’ influence on attitudes’ interior design, social issues and environmental conservation. We underscored the importance of Morris’ 16th century holiday home Kelmscott Manor, which the designer lovingly referred to as “heaven on earth.” It was there in the Cotswolds that William Morris met Emery Walker, after whom the Emery Walker House is named. The two became fast friends, eventually collaborating on Morris’ Kelmscott Press project in 1891.

As Morris’ death approached, it was Walker who cared for him in illness. Emery Walker House stands as a tender reminder of the pair’s friendship. Furniture gifted by William and his wife Jane, Morris & Co wallpapers and sketches of family members can be found throughout. Having undergone significant conservation after receiving a grant in 2015, the house at 7 Hammersmith Terrace can now be enjoyed by visitors.

In his article “Emery Walker’s house is an Arts and Crafts utopia” for Apollo Magazine, Marcus Waithe details the home’s Arts & Crafts interior. He writes that “the sense of a stopped clock prevails at Emery Walker’s House” due to decades of thoughtful — though informal — historic preservation. Waithe notes that “the variety of object and allusion is striking, but [is not] at odds with [this] version of Arts and Crafts culture.”

The hodgepodge of items found in 7 Hammersmith Terrace “typifies the way that Arts and Crafts figures actually lived.” Perhaps most striking is the house’s collection of original Morris & Co wallpapers, fabrics and etchings. An early edition of Morris & Co’s Willow wallpaper can be found in the dining room. Additionally, a blue Morris & Co carpet from Kelmscott Manor decorates the bedroom. While it bears much of Morris’ original work, Waithe concludes that “this is the house not of Morris, but of a Morrisian.”

Another historic interior design program we love is that of Room 8 in Hotel Endsleigh, a 19th century home in Devon, England. While Endsleigh Cottage was built in the 1810’s for the Duke of Bedford, it has since been transformed into a nineteen room hotel. Today, the home’s gardens enjoy a spot on the National Register of Historic Parks and Gardens. Victoriana enthusiasts often flock to Hotel Endsleigh because of rumors that the Queen stayed in Room 8 while traveling through Devon. History buffs might also be interested in the property because Endsleigh House was designed by Jeffry Wyatt. Wyatt also spearheaded Windsor Castle’s 19th century renovations.

As the house is still in use, its interior balances modern and historic elements. In an article for Country Life, Non Morris writes that “the interior of the house has been restored” by historic preservation professionals. In doing so, “old furniture [has been] mixed with contemporary fabrics to create a deeply comfortable atmosphere.” Though not all interior elements are original to the house, its antique wallpapers certainly are. Room 8 — a first floor bedroom in the main house — is one of several Bedford rooms with original 19th century chinoiserie wallpaper. According to the Hotel Endsleigh website, the room’s “stunning hand-painted chinoiserie wallpaper dates back to the construction of the house.” It is possible that Queen Victoria’s love of nature is what drew her to stay in Room 8 when “visiting the Bedfords in 1856.”

The Conservancy notes that Barnsdall originally imagined Hollyhock House as “the centerpiece of an artists’ colony.” While the house “is monumental in form,” it was actually inspired by the flowering hollyhock plant. Stained glass windows designed by Wright and bearing the distinctive hollyhock flower can be found throughout the home. Today, Wright’s Hollyhock House is credited as one of the first to “seamlessly integrate the indoors with outdoor gardens and living spaces.” This shift would be one of several defining characteristics of Mid Century Modern domestic architecture.

The Conservancy notes that “while the interior is remarkable throughout, the living-room hearth…provides a particularly dramatic focal point.” Hollyhock House’s living room is “topped by a skylight, integrating a seemingly floating hearthstone, bas-relief stone mural, and wood-slat screen.” In his article “An Insider’s Tour of Frank Lloyd Wright’s Hollyhock House” for AD, Lee F. Mindel further describes the living room’s interior design.

Mindel notes that Wright himself designed the lighting for Hollyhock House’s living room. He also designed the seating — which is still “centered in front of the fireplace” — as well as “rugs and textiles [which are also] informed by the hollyhock.” The seating arrangement chosen by Wright “echoes the forms of the house,” creating a single harmonious experience.

Described by House Beautiful writer Mary Elizabeth Andriotis, Elsie de Wolfe was “America’s first interior designer” and likely its most famous. De Wolfe’s clients included writers like Oscar Wilde, Brits like the Duke of Windsor and American royalty like the Fricks and the. Morgans. Though de Wolfe died decades ago, her work remains relevant. Interiors designed by de Wolfe can be found all over the US — particularly in Hollywood and New York.

Chief among her historic interiors is the Tea House at Planting Fields in Oyster Bay, New York. Andriotis describes de Wolfe’s tea house as “a remarkable piece of design history.” Quoting Gina Wouters — Executive Director of the Planting Fields Foundation –, Andriotis writes that de Wolfe “‘was the tastemaker.’” Because “‘having her design a space in one’s house showed how of the moment it was,’” the Coes jumped at the chance.

In her article “In a Mansion’s Interior, a Study in Contrasts” for The NYT, Aileen Jacobson marvels at de Wolfe’s enduring impact on interiors. Jacobson writes that “Elsie de Wolfe favored flowery painting on walls and furniture, mirrored surfaces to reflect light and an overall brightness.” Aileen Jacobson notes the room’s monumental rococo mural, “delicate trellises…lighting fixtures in the forms of bouquets of flowers, and floral-painted furniture.” The sky blue room bears Elsie de Wolfe’s “signature color,” which the designer also applied to her hair.

#5 The Bergel Rooms of Schönbrunn Palace in Vienna, Austria

A 17th century Baroque pleasure palace in Hietzing, ‎Vienna‎, ‎Austria, Schönbrunn was originally commissioned by Emperor Ferdinand II’s wife Eleonore von Gonzaga. The palace was built on a site originally owned by the abbey at Klosterneuburg during the Dark Ages. In the 18th century, Maria Theresa significantly altered the original palace to match contemporary tastes. The Millions Room and the Rich Room are perhaps the most exotic and dramatic of those at Schönbrunn. However, a series of apartments commissioned by 18th century Habsburg ruler Maria Theresa are likely the loveliest.

In an article for Planet Ware, Bryan Dearsley writes that “the most attractive apartments once occupied by Maria Theresa…are the Bergl Rooms.” Maria Theresa’s “richly furnished Garden Apartments with their exotic decorative styles…include works by Johann Bergl.” John Bergl — after whom the rooms are named — was an important Czech rococo decorative artist living and working in Vienna during Maria Theresa’s reign. The Schloss Schonbrunn website notes that “Maria Theresa increasingly suffered from the heat during the summer months” as she aged.

It was during “the last ten years of her life” that Maria Theresa commissioned Bergl to complete a series of botanical and pastoral murals. These murals — which face the Privy Gardens of Schonbrunn — took nearly ten years to complete. According to the palace’s website, Bergl’s illusionistic murals “aimed at dissolving the confines of the room.” He hoped these wall paintings would “merge the painted representation of Nature on the walls with the real landscape beyond the windows.” Schonbrunn’s Garden Room interior decoration is some of the most stunning in the world, even centuries later.

Sun Apr 10 , 2022
Photo: istockphoto.com While some industries are beginning to rebound from the Covid-19 pandemic, the home improvement trade continues to struggle. Between ongoing labor shortages and supply chain issues, prices for home renovation projects keep rising. According to the recent consumer price index released by the U.S. Bureau of Labor Statistics […] 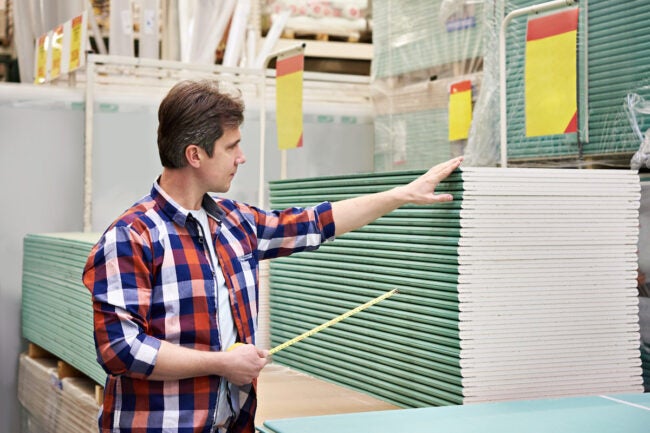